You are here: Home / All posts tagged jolla
28 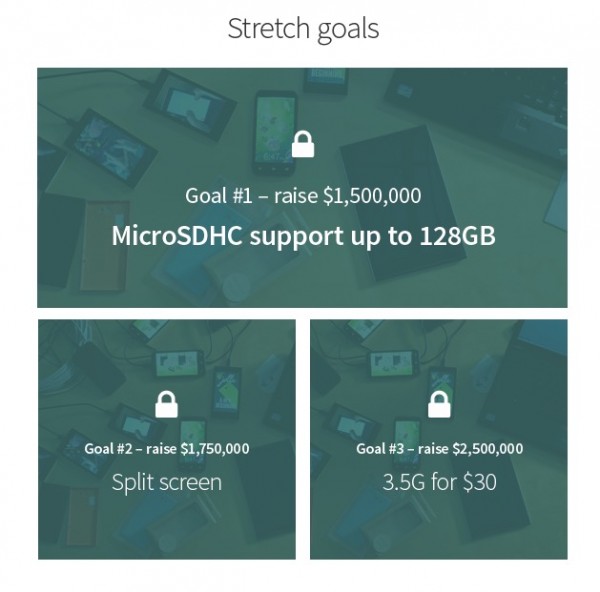 Jolla set themselves an achievable target of $380,000 to get their first tablet out to interested consumers. Now they’re pushing to boat (currently at $1.3M).

In the first two days, Jolla reached a million and seems to have slowed down now. But it may interest a few more buyers now this option is available.

Stretch goals mean that even if the new goals aren’t reached, you’re still going to get your Jolla tablet.

I’m not sure why they need more money for split screen. Isn’t that simply software? Jolla recognises that this is the most wanted feature according to their users so they should really put this in regardless. 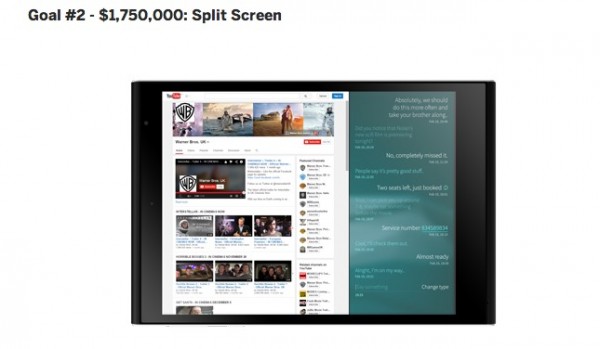 Cheers Sefriol for the tip!

Jolla team has released Update 9 code-named “Uitukka” to its Sailfish powered smartphones. The latest release of Sailfish 1.1.0.38 is an opt-in release, means you won’t get the usual notifications unless you willingly sign up to receive this OS update.

A few points to note before you sign-up for this update:

If you are a developer or a user willing to forgive performance hiccups, sign up for this opt-in release by sending an email to update9-opt-in@jolla.com. Make sure that the From-Address used is the one matching your Jolla account.

Jolla has released Hotfix for opt-in Update 9, version 1.1.0.39 that prevents the connectivity manager from crashing on custom provisioned configs. This hotfix is available for users who have already opted in for Update9 and the new users who want to opt-in for Update9.

Times Of India: Is Jolla Sailfish a Good Alternative to Android? 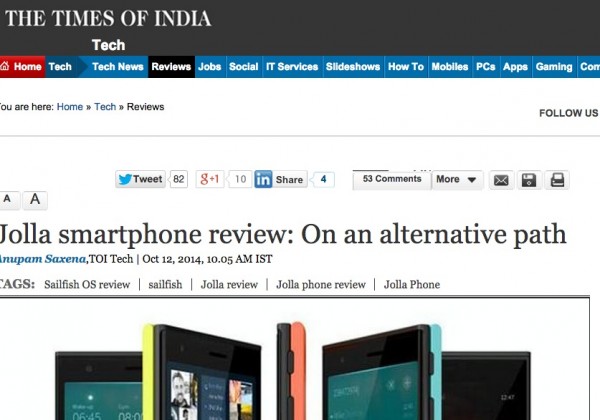 Jolla’s Sailfish phone is new to Indian shores. How are they receiving it? Times of India question whether it’s a good alternative to Android in their review.

Design wise, they see some cues from Nokia’s N9. To TOI, it looks a little thick, especially when viewed from the sides it appears like two slim phones on top of each other.

For the price, they really were expecting a lot more than 960×450 for the display. Legibility in sunlight was average.

Software wise, there’s been a few updates since release (and another on the way).  Like pretty much every review of Sailfish, they mention the steep learning curve with this gesture based UI as ‘taking some time to get used to’.

This is a phone for enthusiast, not for everyday buyers. At this price, alternatives include the Nokia Lumia 730, Micromax Canvas knight, Asus ZenFone 6 and HTC Desire 616. 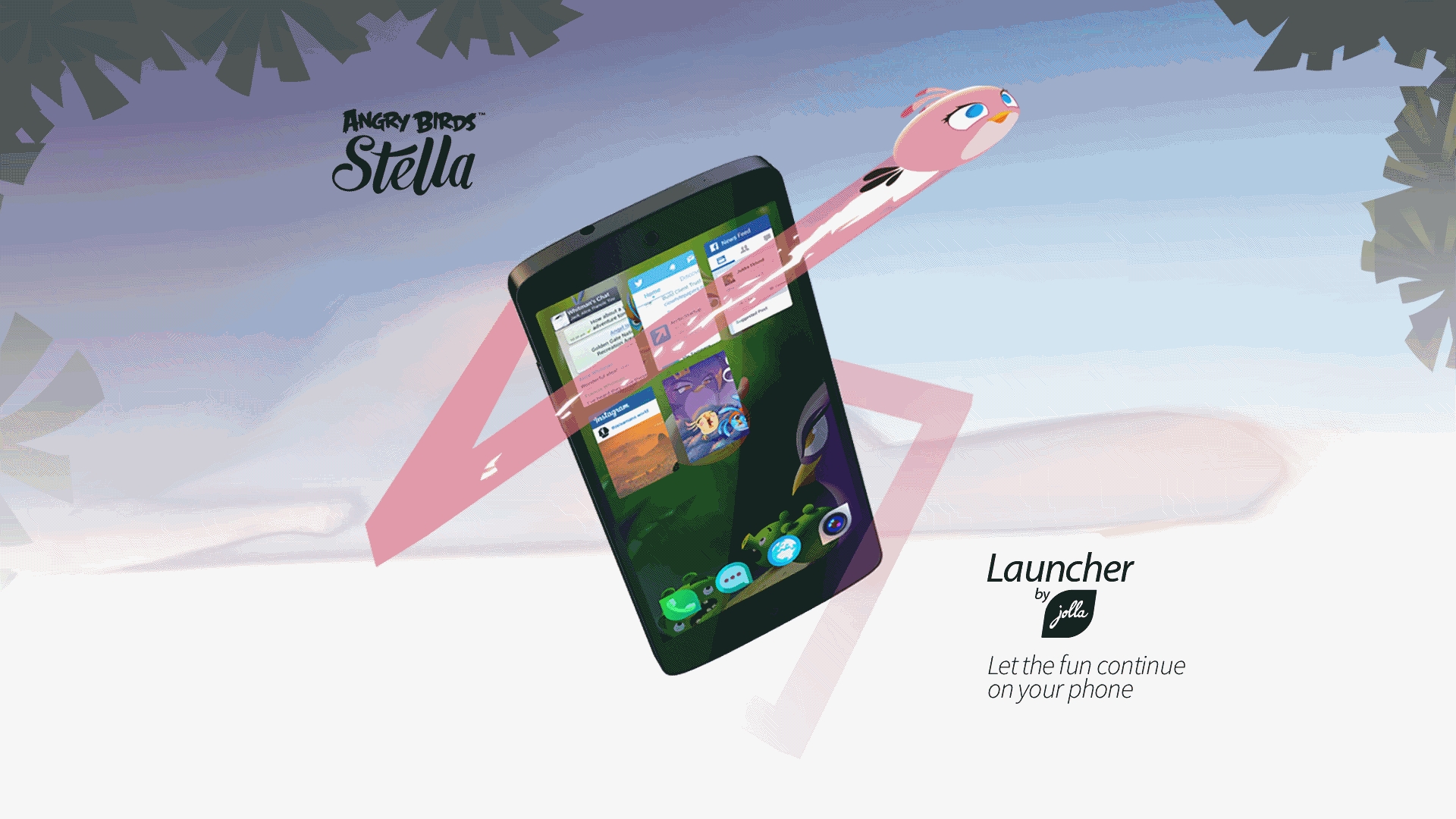 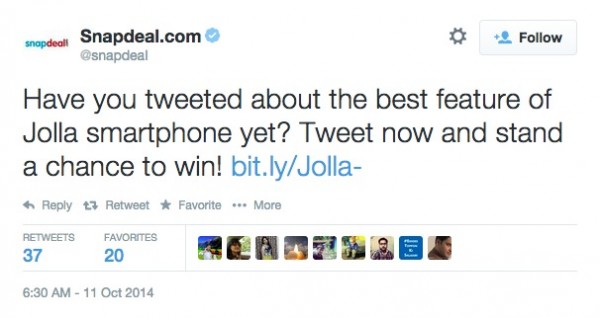 Here’s a chance to win yourself a JOLLA Phone.

Tweet the best feature of Jolla Phone. I think there are some pre-picked options. It’s basically a ‘follow snapdeal’ thing. 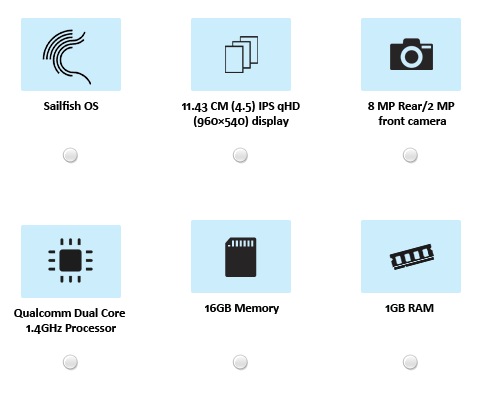 1. Entries open till 14th October 2014.
2. Winners will be notified on Twitter
3. You have to follow the official Snapdeal handle https://twitter.com/snapdeal
4. By participating in the contest, you agree that we can use Tweets shared by you for promotional purposes.
5. We reserve the right to immediately terminate your entry in the contest without further notice
6. We reserve the right to extend the contest without further notice.
7. The Tweets should not contain any adult, obscene or pornographic content 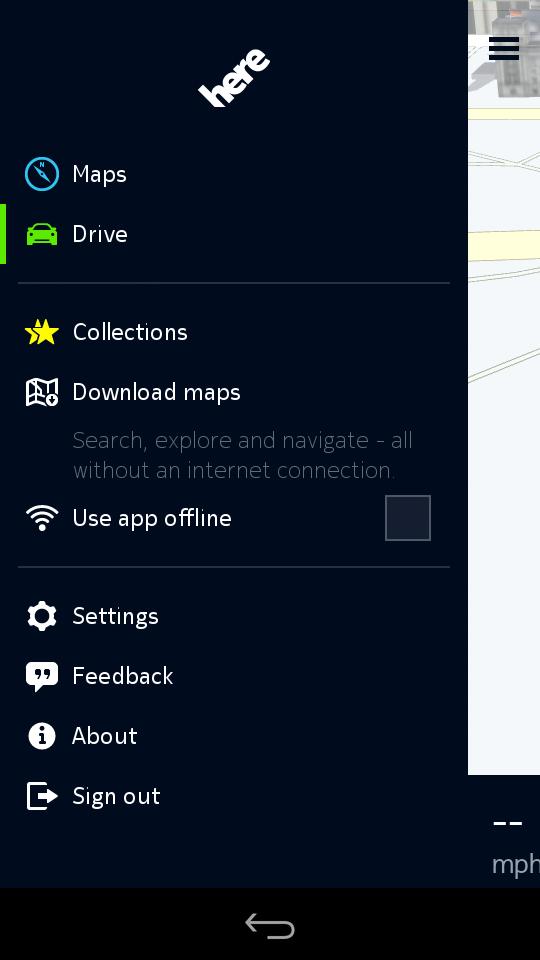 There’s reports that you can now download maps for offline use in Jolla – well, with the Android port.

As announced, the Finnish smartphone start-up Jolla today launched its first Sailfish OS powered smartphone in India for Rs. 16499 exclusively on Snapdeal. To sweeten the deal, they are also offering Jolla VIP pack worth Rs. 7000 free to first 90 buyers of the Jolla smartphone.

At the launch, Sami Pienimäki, Co-founder and CMO of Jolla Ltd said:

Today, we are extremely excited to announce the availability of the Jolla smartphone and Sailfish OS in India, offering a true new alternative to the smartphone market. The most widely used mobile OS is rapidly colonialising the digital world, removing any sort of differentiation and turning the once exciting smartphone business into a hardware battle. Jolla smartphone with its open and independent Sailfish OS, is bringing excitement and freedom back to the smartphone industry.

Jolla smartphone also comes with The Other Half smart covers, which offer a great combination of hardware and software innovation. Each of these covers are designed to provide a unique experience, courtesy of preset ambiances and functionalities, including colors, fonts, sounds, profiles, and applications. These covers are manufactured from ultra-durable and scratch resistant polycarbonate.

Jolla smartphone comes in White color and is priced at Rs. 16,499 in India. The handset is exclusively available on Snapdeal. First 90 buyers would get the VIP box free, which includes three NFC enabled Other Half covers in Poppy Red, Keira Black and Aloe colors.

Video: New demo of 3D printed OLED Jolla “The Other Half” (and LED notification?)

Here’s the latest iteration of the OLED “The other Half” back covers for Jolla Phone.

This is the one with an OLED panel at the back. What’s that at the right though – LED notification? That for me would be useful (like on the Nokia N900)

When a call is incoming the screen flashes.

Jolla HK were pretty proud of their VIP packages which folks could see at the Jolla HK night.

The Finnish smartphone manufacturer Jolla and carrier 3HK officially announced the availability of Jolla’s Sailfish OS-based smartphone in Hong Kong. The handset is available for free on the 4G LTE Super Plan, or for HK$2,888 ($21.7) direct from the network.

To sweeten the deal, the wireless carrier is offering 25% discount on The Other Half cover. Also the first batch of users to grab the device will get Jolla VIP pack, which includes 3 additional The Other Half smart covers for free.

Jolla smartphone runs on a unique gesture-based operating system Sailfish OS that has been built on the heritage of MeeGo, an open source operating system formerly developed by Nokia among others. The handset features a 4.5-inch  960×540 qHD IPS screen, a 8 MP rear camera with LED flash, a  1.3 MP front facing camera for video calls, 16 GB of internal storage that can be expanded via microSD cards.

The smartphone also comes with The Other Half smart covers, which offer a great combination of hardware and software innovation. Each of these covers are designed to provide a unique experience, courtesy of preset ambiances and functionalities, including colors, fonts, sounds, profiles, and applications. These covers are manufactured from ultra-durable and scratch resistant polycarbonate.